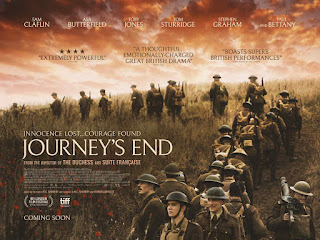 British writer and World War I veteran R. C. Sherriff captured the horror of war in his 1928 play "Journey's End." Now reworked as a film, this new version arrives on the 100th anniversary of the events of this story. Asa Butterfield plays an upper crust idealist, who uses his connections for a posting in a company led by Sam Claflin, an older classmate in love with Butterfield's sister. When Butterfield arrives, it's clear his friend has changed under terrible pressure. Paul Bettany stands in contrast, a fellow gentleman and measured officer hoping to escape a terrible fate. We get an "Upstairs/Downstairs" view of the war, as officers dine on china and fine wine, while enlisted men shiver in the trenches. Toby Jones stands out as an officer's cook and waiter, observing their situation in the style of a Shakespearian character. The final scenes lead to a graphic of the grim statistics of 1918. "Journey's End," 3 stars, rated "R." Does it deliver what it promises? Contemplating the war of a century ago. Is it entertaining? Slow and often claustrophobic. Is it worth the price of admission? Serious stuff.
Posted by Arch Campbell at 10:54:00 AM