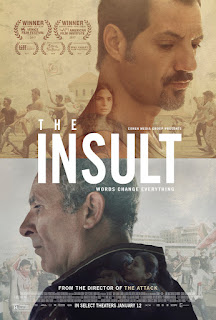 "The Insult" - set in modern day Beirut - begins with a group of construction workers, who get doused by runoff from an apartment owner's balcony. The foreman offers to fix the problem; but the apartment owner belongs to the Christian party, and identifies the foreman as Palestinian. He slams the door, refusing help and things escalate. Soon the apartment owner demands an apology. The foreman arrives to deliver it, but overhears anti-Palestinian rhetoric playing in the background. Words turn to fists, and the men go to court where their case turns into a national issue, revealing a deeper nature of the argument. "The Insult" has received a well-deserved Academy Award Best Foreign Film nomination. "The Insult," 3 stars, no rating (with subtitles.) Does it deliver what it promises? A small act turns into a national issue. Is it entertaining? Well told and acted. Is it worth the price of admission? One of the year's best foreign films.
Posted by Arch Campbell at 1:38:00 PM