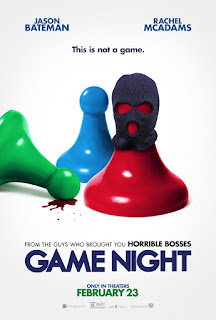 Jason Bateman has morphed into a comedy everyman. He's to comedy, what Tom Hanks is to drama. He brings just the right mix of sarcasm and humor to the variety of middle-aged guys he plays. In "Game Night," he meets Rachel McAdams, as they both shout the answer at a trivia night quiz. Their "meet cute" leads to a delightful montage of courtship and marriage and the setup of their weekly game nights with two other couples. The wrinkle comes as Jason's big brother, played with delightful menace by Kyle Chandler, arrives and invites all to a state-of-the-art murder mystery night that (of course) goes wrong. Chandler, it seems, is not the business whiz he claims to be, but rather a shady criminal with bad guys on his tail. His kidnapping, which the others think is part of the game night, turns out to be all too real. "Game Night" rises above most comedies thanks to writing, sparkling jokes, and character development. The script throws a triple twist, adding to the fun. Jesse Plemons stands out as a creepy next door neighbor with an agenda of his own. Bateman and McAdams make this comedy easy. "Game Night," 3 stars, rated R. Does it deliver what it promises? Winning comedy. Is it entertaining? Actually funny. Is it worth the price of admission? The real thing.
Posted by Arch Campbell at 11:01:00 AM