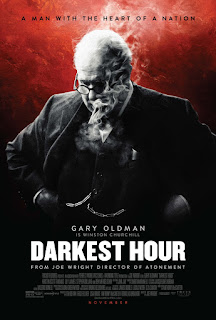 Gary Oldman gives an award-worthy performance as Winston Churchill in "Darkest Hour.' The film focuses on May of 1940. The Nazis have invaded France: England appears next. Churchill becomes Prime Minister as a compromise candidate. Many in power talk of negotiating or appeasing Hitler. All appears lost, when the Nazis surround the British army in France and push them to the sea in Dunkirk. Churchill proposes a civilian fleet to rescue England's soldiers. The evacuation of "Dunkirk" mobilizes the British population for the coming war. "Darkest Hour" looks beautiful, filmed with the tint of history. Oldman mutters Churchill's great quotes, winning laughs from his peers on screen and us in the audience. "Darkest Hour" creates a thrilling great man story, an old-school treat for modern audiences. "Darkest Hour," 4 stars, rated PG-13. Does it deliver what it promises? Great war biography. Is it entertaining? Beautiful and quotable. Is it worth the price of admission? Yes.
Posted by Arch Campbell at 2:20:00 PM