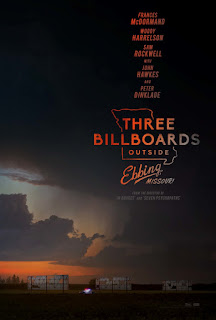 "Three Billboards Outside Ebbing, Missouri" pushes the limits of comedy. It deserves billing as an award contender, even though I imagine some in the audience will take offense and leave the theater. Frances McDormand rents three billboards to embarrass the local sheriff, played by Woody Harrelson. Several months earlier, her daughter was beaten, raped and burned alive... and no arrest has been made. Harrelson dials back his personality to create a most likable character, a family man doing the best he can and dealing with an even bigger personal issue. His deputy (Sam Rockwell) struts around in uniform, a little too proud of himself, while displaying an alarming lack of intelligence. "Three Billboards" flings casual racism, violence, meanness, and the reaction of a town full of hurting humans at us just for laughs. It's Mayberry on acid and that's funny... or alarming. "Three Billboards Outside Ebbing, Missouri," 4 stars, Rated "R." Does it deliver what it promises? Comedy about a town full of hurting people. Is it entertaining? Shockingly funny. Is it worth the price of admission? An award contender and well worth it, if you're up to the challenge.
Posted by Arch Campbell at 4:51:00 PM