Thank You for Your Service Review - 3½ Stars 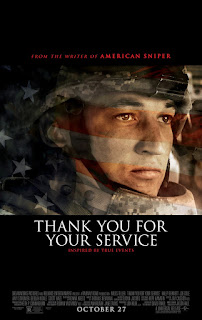 "Thank You For Your Service" digs deeper into the problems of returning Servicemen. Miles Teller plays a struggling Iraq war veteran, one of three comrades suffering from Post Traumatic Stress Disorder. Teller and his friends & family wrestle with the Veterans Administration, while trying to come to grips with their personal situation. The great cast includes breakout roles for Haley Bennett as Teller's no nonsense wife, Amy Schumer as a war widow, and little-known actor Beulah Koale, whose demons go to the heart of this. "Thank You for Your Service" shows war with a steady hand. It's based on a veteran's memoir, and directed with assurance by Jason Hall, who wrote "American Sniper," yet another riveting life-after-war story. Miles Teller has emerged as one of our time's great young actors. "Thank You for Your Service" makes good use of his talent. "Thank You for Your Service," - rated "R,' 3½ stars. Does it deliver what it promises? Strong dose of reality. Is it entertaining? Shines a light. Is it worth the price of admission? One of the year's best.
Posted by Arch Campbell at 12:16:00 PM