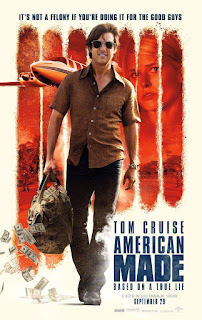 I didn't expect much from "American Made." It spins another caper in the mold of "The Big Short," "Goodfellas" or "The Wolf of Wall Street," and stars perpetual pretty boy Tom Cruise. This is the mostly true story of bored TWA pilot Barry Seal, recruited by the CIA in the 1970s, and the first to take pictures of insurgents in Central America. The agency ups the ante, and soon Cruise is ferrying drugs for the Colombians, and bringing weapons to revolutionaries. Told in flashbacks recorded into a camcorder, it sounds familiar, but "American Made" tells it with great humor and energy. Cruise still has the charm that made him a star 30 years ago. I don't want to like him, but in "American Made" I can't help it. 3 stars, rated "R." Does it deliver what it promises? Crime caper, sanctioned by Uncle Sam. Is it entertaining? Fun, from start to finish. Is it worth the price of admission? Sure.
Posted by Arch Campbell at 8:24:00 PM