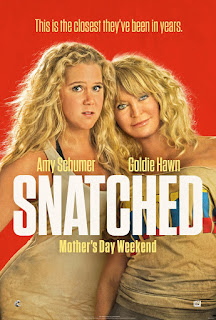 Amy Schumer teams with Goldie Hawn for the raunchy "R" rated mother/daughter laugh fest "Snatched." Schumer's humor resonates with the times, starting with her first scene as a bored salesgirl, ignoring customers to shop for herself. She's got a big non-refundable trip to Ecuador with her man. Naturally, in the next scene he drops her like a hot potato. Jobless and manless, Amy goes home to her mom, played by Hawn, who hasn't been in a movie in years and reaps buckets of goodwill just by showing up on screen. Amy talks Goldie into going with her, and of course everything goes haywire, including kidnapping, captivity, and no cell service. The delightful Wanda Sykes shows up with a "platonic" friend (irony intended) played silent by Joan Cusack. This pair will figure in Amy & Goldie's rescue. Christopher Meloni, once of "Law & Order: SVU" makes another in his long line of hilarious cameos. His entrance (and exit) brings some of the loudest howls, as do several scenes with Schumer, who proves she's up for anything to get a laugh: I salute her courage. "Snatched" is not great, but it is outrageous "R" rated fun. 3 stars. Does it deliver what it promises? You'll laugh, I promise. Is it entertaining? You'll laugh, I promise. Is it worth the price of admission? See above.
Posted by Arch Campbell at 11:30:00 PM