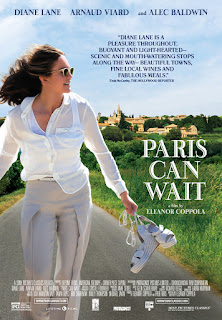 Eleanor Coppola of the talented Coppola family (her husband is Francis Ford Coppola, her daughter is Sophia Coppola) makes her feature film directing debut in "Paris Can Wait." She's 80, and I mention her age, because I'm getting up there myself, and it's grand to see mature people active and contributing. The mixed news is "Paris Can Wait" isn't exactly the best movie of the year, even though at times, it combines beauty, art, food and France in a manner that will appeal to a select audience. Diane Lane plays the wife of big shot movie producer Alec Baldwin (who's in danger of forever being typecast as a Donald Trump imitator.) At any rate, Baldwin takes little notice of the ethereal Lane. Scheduled to travel from Cannes to Budapest, she's advised not to board the private jet, because of an ear infection. Instead, she's pushed to travel direct to Paris with her husband's producing partner, Frenchman Arnaud Viard. Baldwin jets away: Lane and Viard climb into his ancient Peugeot sports car. Together, they stop hourly to smoke & stretch and sample the fare at a series of multi-star restaurants. Lane's character has developed a new interest in photography, that turns annoying in a hurry. Viard has seduction in mind, and we've already established that Baldwin doesn't pay enough attention to her. "Paris Can Wait" looks beautiful. The countryside, the inns, the food, the wine, everything looks grand. The couple chat & flirt and draw out the chase, propping up the "will she or won't she" tension. Unfortunately "Paris Can Wait" lacks the sparkling dialog, the visuals demand. "Paris Can Wait" - 2 stars, rated PG-13. Does it deliver what it promises? Visually beautiful French travelogue. Is it entertaining? Drags at times, charms at others. Is it worth the price of admission? Made for a select group of well-off one percenters, who love vacationing in France.
Posted by Arch Campbell at 1:02:00 PM