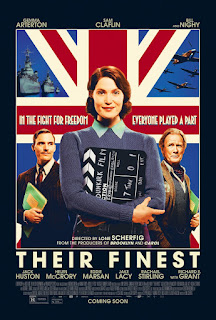 A young woman comes of age during the London Blitz in the charming movie "Their Finest." Gemma Arterton lands a job writing morale-boosting dialog for British government propaganda films in 1940. The war is real for London residents, as the Nazis bomb the city nightly and residents crowd into subway stations and cellars, emerging in the morning to views of destruction and news of deaths. The government film bureau attracts an oddball group... wannabe actors, movie writers and most notably over-the-hill actor Bill Nighy, who has perfected the art of playing grumpy but lovable older characters. Higher ups determine that Britain can help rally America to their cause with a Hollywood-style movie based on the evacuation of troops at Dunkirk. This development turns the story into a movie about making a movie. The little group bonds as they work. Gemma feels sparks for her wiseacre fellow writer played by Sam Claflin, even through she's in a relationship with Jack Huston, a difficult artist and wounded Spanish Civil War veteran. Romance and movie-making combine with daily reminders of the real thing. The result is charming, made even more so in a wrap party in which two actresses sing the WWII ditty "They Can't Black Out the Moon." I stayed for the credits, just to hear it again. The story is compelling. The movie looks great, the actors come through and "Their Finest" is hard to resist. 3½ stars, rated R. Does it deliver what it promises? Charming WWII romance. Is it entertaining? Delightful. Is it worth the price of admission? See it.
Posted by Arch Campbell at 9:53:00 PM