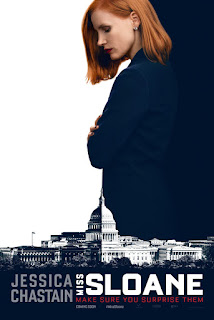 Jessica Chastain powers her way through "Miss Sloane," a driven lobbyist speechifying as she bustles down the hallways of an industry that allows her to take on issues... not out of belief, but rather as part of a winning-is-everything game. Her vision: Win by anticipating your opponent's next move and slamming a surprise on them in response. Working at one of DC's most powerful firms, she laughs in the face of a gun lobbyist hoping to hire her firm to win over women in a campaign against gun background checks. She loses the business and enrages senior partner Sam Waterston, the former "Law & Order" good guy, now content to take hack roles like this one. Chastain jumps to a firm managed by Mark Strong. She flips sides, to work on behalf of a bill requiring gun sale background checks. The chess match begins, one move resulting in a counter move and confirmation of Chastain's philosophy to stay a step ahead. "Miss Sloane's" first rate cast includes John Lithgow as a sniveling congressman (another great actor in a hack role) Michael Stuhlbarg as a sputtering opponent (ditto) and Gugu Mbatha-Raw & Alison Pill as colleagues. The great cast can't save "Miss Sloane" from a bad case of overkill. The script loads on the cliches, and more than a few too many counter-move surprises, most of them feeling contrived. Jessica Chastain rarely drops her shouting intensity. It doesn't take long for the cynicism to wear you out. For corporate greed and payback, "Michael Clayton" did this a lot better. 2 Stars and an "R" rating for intensity, language, and sexual situations. Does it deliver what it promises? DC lobbying drama. Is it entertaining? Never feels real. Is it worth the price of admission? Not unless you need a warm place on a cold day.
Posted by Arch Campbell at 12:51:00 PM