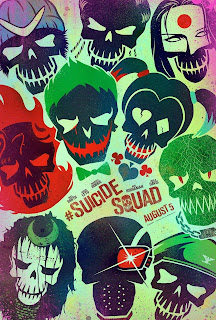 Suicide Squad starts with a burst of energy and fun. Shadowy government agent Viola Davis has a plan to keep America safe. She will recruit the meanest, baddest, most anti-social criminals in lock-up; and in return for a few years off their sentence, let them butt heads with America’s enemies. The introduction to the various characters gets more outrageous by the second, giving prominence to Will Smith, as “Deadshot,” the sniper who never misses, and Margo Robbie as crazy-hot psychiatrist-turned-circus star Harley Quinn. The rest of the characters include a guy who lives in the sewer, another guy who throws flames at will, a masked Chinese swordswoman named Katana, a bunch of other people, and Dr. June Moore whose body has been taken over by the Enchantress, an ancient supernatural witch. The Enchantress leaves the team of good bad guys to become the chief bad girl, using her powers to blow up Gotham City and a lot of other places and things. Before she turned into a witch, she loved her boyfriend played by Joel Kinnaman, one of the great character actors floating around today (Remember him in “The Killing?”) In spite of a pretty good start and a lot of great 1970’s music, plus a seething performance from Viola Davis, “Suicide Squad” suffers from overload pretty quickly. By the movie’s end, what started as giddy fun turns tedious. Jared Leto has a few juicy scenes as The Joker, the love interest for Margo Robbie. Ben Affleck turns up a few times as Batman, but don’t blink. DC Comics made this with sequels and franchise dollar signs dancing in their heads. I hope they go back to the drawing board before they make another one, because all they’ve got is the same old summer movie, loud bang, special effects-laden thing. 2 stars. PG-13 for violence, noise, death and destruction. Does it deliver what it promises? Bad guy comic book characters fight to save the world. Is it entertaining? Same old, same old. Is it worth the price of admission? Not really.
Posted by Arch Campbell at 6:49:00 PM