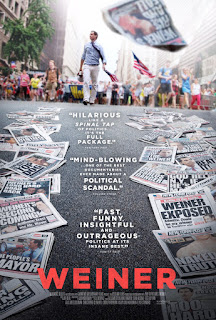 Every now and then, a documentary strikes a chord, and this summer "Weiner" is that movie. "Weiner" is Anthony Weiner, who resigned from the U.S. House of Representatives after a woman revealed a text picture he sent her, showing a bulge in his underwear. Weiner's marriage to Huma Abedin, the longtime aide to Hillary Clinton, provides a contemporary element to the film. Do I need to remind you that Abedin and Hillary Clinton are close friends, and that Hillary had to contend with her own husband's admission of sexual scandal? The documentary appears to begin as a record of Weiner's political comeback, as he begins what looks like a successful run in the Democratic primary for New York City Mayor. However, another woman comes forward, revealing both texts and nude photos sent to her by Weiner. The film shows a campaign in crisis, one not handling crisis very well. On election eve, shock jock Howard Stern brings the woman (Sydney Leathers) to New York to confront him. The confrontation never happens, because of a documented cat-and-mouse chase between the girl and the campaign. "Weiner" captures the pain in Weiner's marriage in several breathtaking scenes. One plays out in long, drawn-out silence and will resonate with any spouse who finds him or herself shamed and embarrassed. "Weiner" captures a politician in all his humanity, and reminds us of the candidate's passion to improve society. At one point, the filmmakers ask "Why are you letting us do this?" Weiner has no answer, but this study of talent, vanity, narcissism and shame is like watching a car crash. You can't take your eyes off the screen. "Weiner" 3 1/2 stars. Does it deliver what it promises? Stunning story, caught on tape. Is it entertaining? Fascinating. Is it worth the price of admission? One of the year's best. A must-see documentary.
Posted by Arch Campbell at 4:14:00 PM