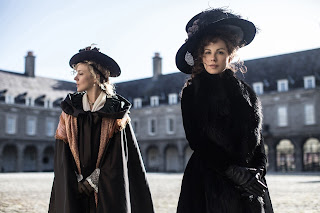 Kate Beckinsale has great fun as seductive, manipulative Lady Susan in director Whit Stillman’s adaptation of Jane Austen’s novella “Love & Friendship.” Beckinsale begins the story theatrically mourning the death of her wealthy husband. His death requires a search for a new husband and proper income stream. While she’s at it, Beckinsale has a 16-year-old daughter also in need of a husband. Soon both women visit Beckinsale’s brother-in-law, where prospects abound, including Xavier Samuel who seems appropriate for either Beckinsale or her daughter. “Love and Friendship” celebrates words and conversation, even if some viewers may find it talky. Beckinsale excels as a woman who knows the value of her assets as well as her reputation as the greatest flirt of her time. Many years ago, Beckinsale and Chloe Sevigny starred in director Whit Stillman’s “The Last Days of Disco.” I liked that movie and wanted to see the two actresses again. Unfortunately Sevigny doesn’t get much to do, other than play an American friend whose husband has forbidden her friendship with the controversial Beckinsale. The story wraps with a thoroughly modern conclusion and an abrupt, but satisfying ending. Does it deliver what it promises? Drawing room comedy based on Jane Austen. Is it entertaining? Sometimes talky but often fun. Is it worth the price of admission? For Austen fans.
Posted by Arch Campbell at 2:13:00 PM