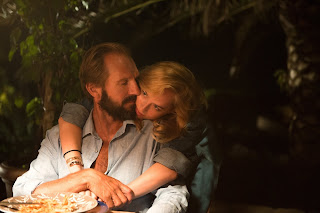 Tilda Swinton plays a rock star with edge and credibility in this jaw-dropping comedy thriller. Vacationing in Italy with her lover Matthias Schoenaerts to following throat surgery, they’re idle is interrupted by the arrival of Tilda’s ex (and former manager) Ralph Fiennes. Not only does he invade their privacy, he also brings along his seductive daughter played by Dakota Johnson, who helps ignite this tension-filled story. Fiennes is the guest from Hell... jabbering, controlling and annoying. Johnson lies low, simmering seductively and telegraphing to us that the young woman has plans. Much is made of Swinton’s silences in her performance. As her character has endured throat surgery, she whispers hoarsely. Viewers can read more into her silence, once this story ends. Swinton and Fiennes remain among the most interesting actors of our time. Schoenaerts hold his own. Dakota Johnson rises above her work in “Fifty Shades of Grey.” She shows talent, and adds zest and mystery to this Hitchcock-style comedy thriller. Does it deliver what it promises? Great performances and a sock-o ending. Is it entertaining? Holds your attention. Is it worth the price of admission? One of the season’s best.
Posted by Arch Campbell at 4:07:00 PM