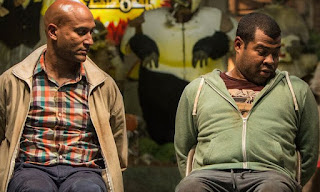 Comedy Central stars Keegan-Michael Key and Jordan Peele turn out one of the year’s funniest movies in “Keanu” - the quest of two modern day cowards to retrieve a cute kitty cat taken by a fearsome drug lord. As in the classic Hope & Crosby, Abbott & Costello, and Cheech & Chong comedies, the boys - complete wimps - somehow find a way to survive the mean streets where they land. “Keanu” (Peele names his cat for Keanu Reeves in “The Matrix”) pokes rapid fire fun at every drug dealing action movie ever made. The out-of-it duo manages to bring George Michael music to the ‘hood in their Honda minivan, while convincing drug lord Cheddar (played by Method Man) that they’ve executed the competition and know their trade so well, they can train his gang in the art of dealing. “Keanu” the kitty cat becomes the ultimate prize in a no holds barred, all-out gang war end all street chase equal to anything dreamed up for “Lethal Weapon I, II, or III.” “Keanu” is classic hilarious “R” rated and broadly funny. Please note the liberal and multiple throwing around of the “N” word to great comic effect. Does it deliver what it promises? Comedy about two cowards, determined to retrieve a kitty cat. Is it entertaining? Delightful. Is it worth the price of admission? One of the year’s funniest.
Posted by Arch Campbell at 1:46:00 AM