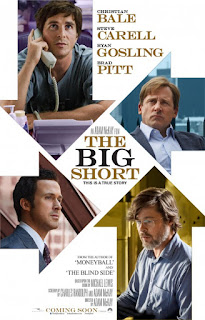 “The Big Short” turns the tragedy of the 2008 housing bubble into comedy... even though most of us laughing, wound up on the wrong end of this joke. Director Adam McKay turns the complicated world of finance, default swaps, and junk bonds into something almost understandable, and makes us cheer for the few who saw the 2008 housing bubble coming, placing multi-million dollar bets against the U.S. economy. Ryan Gosling breaks the wall as he narrates the story of Dr. Michael Burry, played by Christian Bale, who predicts the coming crash. Steve Carrell plays a composite of several real life hedge fund managers. Carrell gives voice to the anger so many of us feel at the institutional greed that caused the crisis. Brad Pitt has several fine moments as a trader disgusted with Wall Street, who helps a couple of up-and-comers get in on the bet, only to upbraid them for profiting as average Americans lose their home, their pension, and their savings. Pitt served as one of the producers of the film, literally putting his money where his mouth is: I respect that. Occasionally “The Big Short” gets a little too glib. Often it goes so fast, it makes your head swim. “The Big Short” never gets boring. I wish I felt it might prevent the next economic crisis - whatever it is. Does it deliver what it promises? Economics as comedy. Is it entertaining? A resounding yes. Is it worth the price of admission? Another resounding yes.
Posted by Arch Campbell at 12:14:00 AM