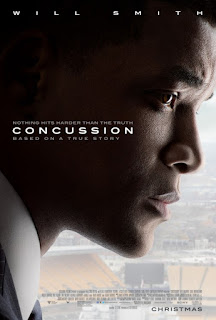 Will Smith loves roles about average guys, taking on the powers that be. In “Concussion,” Smith plays real life Doctor Bennet Omalu, a brilliant pathologist whose curiosity leads him to investigate the death of Pittsburgh Steelers center Mike Webster. This one-time NFL star dies homeless and confused at the age of 50. Omalu goes on to connect the deaths of numerous NFL stars to CTE-chronic traumatic encephalopathy - death by a lifetime of hard hits on the head. For his trouble, Omalu earns the complete wrath of the NFL. The organization does its best to bully him into silence or a retraction. “Concussion” doesn’t pull any punches. Given the NFL’s public missteps and gaffes over the past year, Smith and “Concussion” paint a target on a most deserving organization. “Concussion” continues a valuable discussion, which will one day lead to a change in the way we think about professional football. The film feels a little like a documentary or a “Lifetime” movie of the week; but Smith hits the right note, and gets great support from actors Alex Baldwin, Albert Brooks, and Gugu Mbatha-Raw. Does it deliver what it promises? David versus Goliath story. Is it entertaining? Presented well. Is it worth the price of admission? This is good, solid movie making.
Posted by Arch Campbell at 3:42:00 PM