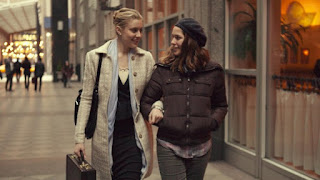 Screwball comedy lives and breathes, thanks to actress Greta Gerwig, who turns her new movie “Mistress America” into head spinning fun. Gerwig plays a woman nearing thirty trying to find her way in the world while befriending a young college freshman, who might become her stepsister. Lola Kirke looks wide-eyed, as she observes Greta’s antic life, starting with a night on the town and building to a day in the country and a visit to a rich former boyfriend and his wife. The now-married guy still pines for Gerwig, but his wife qualifies as a former friend turned nemesis. Greta and her entourage arrives, to hit the poor guy up for money to open a restaurant. Lola takes a few cues from her stepsister-to-be and drags along her ex-boyfriend and his current girlfriend... the better to increase the chances to bicker. You’ll need a clear head to follow the dialogue, which bounces around like a pro volleyball match. Count me among Greta Gerwig’s many fans: She lights up the screen. Does it deliver what it promises? Generation X comedy. Is it entertaining? Screwball comedy. Is it worth the price of admission? Worth it for the laughs.
Posted by Arch Campbell at 9:04:00 PM