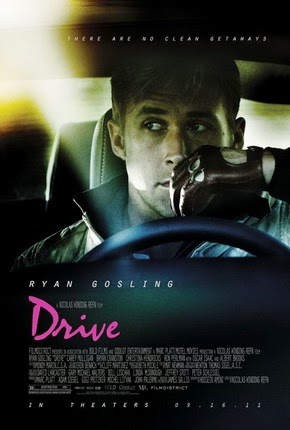 Ryan Gosling lets his driving do the talking in this old school, film noir thriller. Working as a movie stunt driver by day, Gosling rents his services to criminals as a getaway driver by night. Drawn to his new neighbor, played by Carrie Mulligan and her young son, he agrees to help her just-out-of-jail husband pay off a mob debt. Things go wrong, and Gosling finds himself caught in an underworld web. Gosling’s cool reminds me of young Steve McQueen. What more do you want? “Drive” also gives a grand turn to Albert Brooks as a crooked film producer, and Christina Hendricks as an unlucky mob moll. Note the R rating for violence. Does it deliver what it promises? Great story of underworld adventure. Is it entertaining? Compelling. Is it worth the price of admission? A great movie.
Posted by Arch Campbell at 11:16:00 AM